Allows to modify (update) task in other available process.

There are two required requirements for modifying tasks via Modify Task logic:

Task reference can be specified with:

Nodes in the gray box are added automatically for error handling. 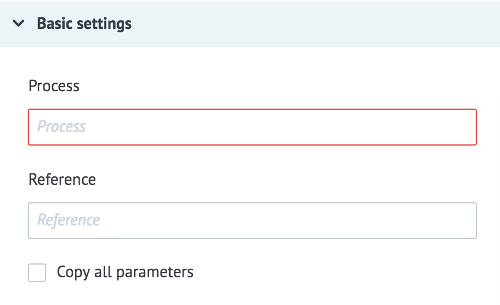 Process - selection of a process for copying from "tree of folders". It can be found by its name or its ID or using the {{conv_id}} (parameter of the task).

Reference - the reference of a new task that is created in another process.

New task reference can be specified by:

If both tasks have a parameter with the same name, parameter value will be updated by Modify Task.
Parameters that were not in the updated request will be added there.

Key - parameter name
Value can be specified by:

If Copy all parameters flag is enabled, it is not required to add new parameters.

Otherwise be sure to add at least one parameter.

Alert when there is tasks queue

Critical amount of tasks in the node.

Learn more about how it works here.

Limit the time of the task in the node

Time interval value at which task will go further through process in case if Copy task logic does not reply.

Learn more about how it works here.

Synchronous callback - checking this box enables modification of tasks synchronously. It means that tasks will be updated sequentially - strictly one after another.
With that, only the tasks located in Waiting for Callback logic nodes are modified. Thus, if the specified task is located in any node of a type other than Waiting for Callback at the moment of Modify Task work, the task will not be modified and the system will display the corresponding error.

If you modify one task at the same time, the duplicate_callback error will occur.

In asynchronous mode (default), after receiving a task from the Corezoid API, the Modify Task node performs the following checks for the task:

After passing through all the steps, the task is moved to Waiting for Callback or Set State target node and processed further.

There is no task with specified reference in the process.

Failed to validate one of the parameters.

For example, you parameter type is Number, but value is string or parameter is missed.

Process must be in the Active state.

User must have Task management access to copy task.

Duplicate modification of the task

It appears only with the flag turned on Synchronous callback. The new changement of the request will not be activated until the previous one finishes.
Standardly if this mistake occurs the request goes to the node with the logic Delay for the second try in 30 seconds.

No callback logic in node with the task

This error occurs if Synchronous callback is enabled.
Otherwise the result is __conveyor_copy_task_result__": "ok".